A marijuana grow field was discovered on Chicago’s Far South Side last week and it didn’t take long for police to completely burn the crop to the ground. The pot field was said to be massive and to be somewhere that police helicopters flew over often, though it remained undiscovered until now. 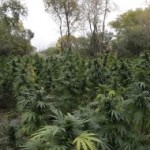 According to the Huffington Post, the plants covered a size of more than two football fields. Some of the plants were as tall as 10 feet and as “big as Christmas trees”. There were approximately 1,000 plants in the area, though they all no more.

Initial reports valued the “low-quality” weed at around $1 million. However, now officials are reporting a street value of between $7 and $10 million. It isn’t clear if this value was one estimated by the police or by the media. It also isn’t clear who was behind the field of green.

The plants were all chopped down and burned. Then, the area where they were discovered was treated with chemicals and covered in wood chips to prevent future plants from coming up.

The bust is said to be perhaps the biggest in Chicago’s history. It was so big that news media sources across the country picked it up—including the humor site The Onion, who remarked, “Are they sure it’s not oregano? One time I bought a field of marijuana from a guy, and when I got it home, it was just a vast field of oregano.”

Mixed in with the pot and surrounding it were tall grasses and weeds, helping to conceal the crop from view. Officers told the media that they had flown over the area “all the time” without spotting the two football fields worth of illegal cannabis.

Usually, if someone is concerned with growing marijuana like this for profit, they will plant it on someone else’s property, mixing in other vegetation to help conceal it. But if this marijuana was low-quality and as big as Christmas trees, there’s a chance that the crop wasn’t being tended to at all.

Regardless of the intention, if police can identify a responsible party, they will.

If you are charged with a serious drug crime like cultivation or trafficking, you need someone on your side advocating for your best interests and working towards the best possible results on your day in court. Contact our offices today to discuss the charges you face and how we might be able to help.